Our thoughts on raising beautiful plants 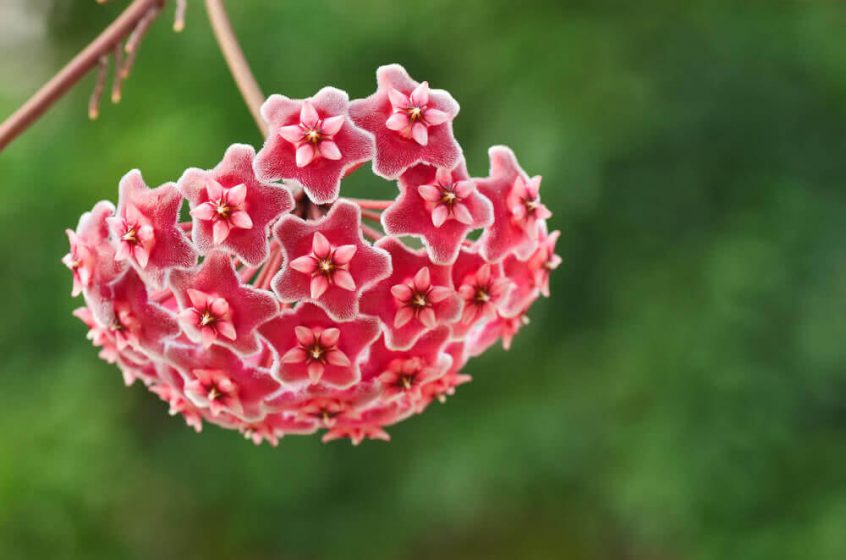 Say Hello to a Hoya

Hoyas, otherwise known as wax plants or porcelain flowers, are seeing a surge in popularity as houseplants—and all for good reason! Hoyas have the potential to become an extremely popular and mainstream houseplant largely for a few reasons—one of which we already mentioned—which are their lovely inflorescences, which are reminiscent of cake decorations expertly crafted out of fondant icing.

Hoyas, otherwise known as wax plants or porcelain flowers, are seeing a surge in popularity as houseplants—and all for good reason!

Many members of the houseplant community are just starting to discover the joy of collecting and growing hoyas, commonly known as “wax plants” or “porcelain flowers”, which are named as such due to the waxy appearance of their flowers (and in some cases, their waxy leaves).

Many folks are attracted to hoyas for their flowers, which are variable across species (and sometimes vary in color within the same species) and often have an array of perfumed scents. In some cases, hoyas are hard to tell apart from one another unless they are in bloom, but to the trained eye, the slight variations in leaf morphology—between species (and even within the same species)—can be detected and very much appreciated.

Hoyas have the potential to become an extremely popular and mainstream houseplant largely for a few reasons—one of which we already mentioned—which are their lovely inflorescences, which are reminiscent of cake decorations expertly crafted out of fondant icing. Many are scented, some are not, and still others are actually quite foul. A good majority of them will smell more at night, which is a testament to who may actually be pollinating them in their native habitats—perhaps some nocturnal moths or beetles, for example.

A second reason why hoyas are quite popular as a houseplant is that they are relatively easy to grow from cuttings. Most just need a node or two and a leaf to take root. Some, which have chlorophyll in their stems, may not even need a leaf—but only a node—to take root and eventually grow.

Certain hoyas—particularly those that are more fuzzy and delicate—like Hoya linearis—are a little more challenging to root and to keep happy in the longterm—than hoyas with thicker, hairless stems and prolific adventitious roots, like the highly cultivated Hoya carnosa or ever-popular Hoya pubicalyx. And all require a decent level of humidity, which we’ll touch upon soon.

Finally, once you have a basic understanding of how most hoyas like to be cared for, then you’ll discover that they are relatively non-fussy houseplants—growing vigorously and flowering consistently year over year.

Hoyas are part of a family known as Apocynaceae, which include the dogbanes, and are placed in the subfamily Asclepiadoideae, which are the milkweeds. For those familiar with common milkweed (Asclepias syriaca), you’ll know that it has an umbelliferous flowerhead; sticky, latexy sap, and seeds with long silky hairs—much like hoyas.

The first hoya was ascribed to the genus in 1810. As of 2015, there have been over 500 scientific names published, however, there is much discrepancy within the group—and new species are being discovered regularly. In speaking with hoya experts, collectors, and botanic gardens around the world, there likely are somewhere between 600-700 hoya species—many still undescribed or unnamed. Hoyas, however, are not the easiest plants to collect, because as we’ll share shortly, many are growing epiphytically (on other plants) in the treetops. Oftentimes, it’s on felled trees where botanists and collectors can actually get access to plants.

The greatest diversity of hoya comes out of subtropical and tropical Asia through the western Pacific. Philippines, Indonesia, Malaysia and Papua New Guinea particularly have a high diversity of hoya, but they can also be found in places like Thailand, China, Singapore, India, Bangladesh, Cambodia, Japan, Laos, Vietnam, Myanmar, Vanuatu and even Australia, just to name some of the areas

Most hoya are growing under 1000 meters (3280 feet). Some, however, grow very close to sea level—scrambling along beaches on grasses and bushes—whereas some are growing in higher altitudes. Elevation comes into play when growing hoya indoors because higher altitude species, like Hoya linearis, can be challenging to grow in the home over the long-term, as it often needs slightly cooler temperature at night—and frequent misting, since they can be subjected to heavy monsoon seasons in their native habitats.

Those growing close to sea level in lowland beach areas, like Hoya diversifolia, often exhibit greater succulency and often require (or can withstand) more intense light conditions than most cultivated varieties found in our garden centers. Additionally, because they are growing in these low-lying areas close to coral, they likely will require a bit more calcareous substrate or amendments to their potting medium.

We can classify hoya into a few different types of growth structures. The first is more vining/climbing (e.g., Hoya australis). The next is more hanging/pendant shape (e.g., Hoya bella). Then there is more erect, bushy and shrublike, which is a bit more uncommon (e.g., Hoya multiflora). And finally there is a shape more in between pendant and shrub-like (e.g., Hoya cumingiana). You may want to consider a hoya’s growth structure for your space. For instance, some of the more pendant shaped ones look great in hanging baskets, whereas a larger Hoya pubicalyx is more of a floor plant ideal for climbing up on a trellis.

Hoya leaves can vary from very thin to semi-succulent to very succulent. With the exception of Hoya imbricata, which is a shingling hoya that only gets one leaf per node, hoyas produce opposite leaves. Leaves always seem to be simple—so never serrated, for instance. This can make them a bit more challenging to tell apart when the plant isn’t in flower, but it also allows the hoya lover to appreciate the nuances of the foliage.

You can often deduce the habitat (and therefore the requirements) of your hoya by looking at the leaves. Thinner, darker, larger leaves often means the plant is more accustomed to shadier, wet environments (e.g., Hoya multiflora), whereas thick, succulent, lighter-colored leaves likely mean the Hoya requires fuller sun and can withstand some level of drought (e.g., Hoya diversifolia).

Hoyas that seem to have a semi-succulent leaf, like the ever-popular Hoya carnosa, will often require a short dry period in order to flower. In the case of H. carnosa, 4-5 weeks of drying out in the spring, along with good window light will likely encourage the plant to flower more.

Hoya stems are often wiry and lactiferous—producing a sticky substance that can often be white, clear, yellowish, or some other color. Along some stems, you’ll find adventitious roots, which make some hoya particularly easy to root. If you give these hoyas higher humidity, the adventitious roots will often grow outwards and begin to cling to certain surfaces. Some stems have chlorophyll in them and those often don’t even need leaves initially to root.

It’s common for hoya to send out long tendrils, which often will have small, insignificant leaves. A common question people ask is whether you should cut those off or let them grow, and my answer would be—let them grow. Give the hoya its own time to clasp and tendril around something. Once it’s found a suitable location and suitable sunlight, it will often start growing out its leaves.

But just a word of caution: many hoyas like to cling—and in situations where you try to move a hoya its not uncommon to pull down multiple plants at once because the hoya tendrils have seemed to grasp onto anything and everything around them.

We’ve already touched upon hoya flowers, but they do vary. The flowers of hoya, which have three main parts—the calyx, the corona, and corolla, are arranged in umbels, which is a flower cluster that emanates from the center to form some type or curved (convex) or flat-topped surface. The corolla, which are the petals of the flower, also have six types, including spreading, revolute, reflexed, campanulate (bell-shaped), incurved (claw-shaped), or urceolate (urn-shaped).

Flower color will vary—and it’s not uncommon for the same plant to have different flower colors as well. This is partially how certain plants, like Hoya pubicalyx has so many different cultivars, or cultivated varieties of plants featuring such a wide range of flower colors.

As we discussed above, many hoya have adventitious roots along their stems and these roots are used to both adhere to surfaces as well as absorb moisture. Upping the humidity will likely form more roots and make them larger, which will benefit the hoya. Since most hoya are epiphytic—growing on the surface of trees—they are accustomed to drying out, so they are a bit opportunistic when it comes to getting water, and these adventitious roots can serve as a way to soak water when they have it. However, giving hoya too much water for too long will not serve the plant. In fact, it will likely harm or even kill the plant, so it’s imperative that it is potted in some well-draining potting medium.